One sticky New Hampshire July summer evening while hosting the annual lobster and clamfest for our UNH Summer Literacy Institute, Donald Murray was in the house.  Now you must know that to have Don in my house was an honor.  He was a man I had admired since I was an undergraduate and then here he was all hot and buttered fingers and faces on the back deck with the rest of us.

And then it happened.  He walked right up to me and asked, “Who wrote the poem, ‘Over the John’?”  I froze.  What?  The ultimate test had come my way and as my face heated up and I began to sweat, I flipped through the suddenly empty files in my brain, wracking it for any poet I could think of.  The words, who wrote Over the John? Over the John?, Over the John?, reverberated in my head.  As I agonized I realized he was staring at me…waiting for an answer and so finally, in the ultimate defeat I simply admitted, “I don’t think I know that poem.”  At which point Donald Murray let out a larger than life guffaw of a laugh and re-stated, “No, the poem over the john in the bathroom, who wrote that?”

And in my state of stunned stupidity it still took me a moment to actually realize that he was not testing me at all but simply asking me a question to which I knew the answer.  “Oh!  My daughter wrote that in 3rd grade.”  To which he responded that she was quite a little writer.  And then he left me there in all of my shame to melt in my sense of stupidity.  I hate tests.  I have always hated tests and this was a self-imposed one.  The pressure makes me stupid. 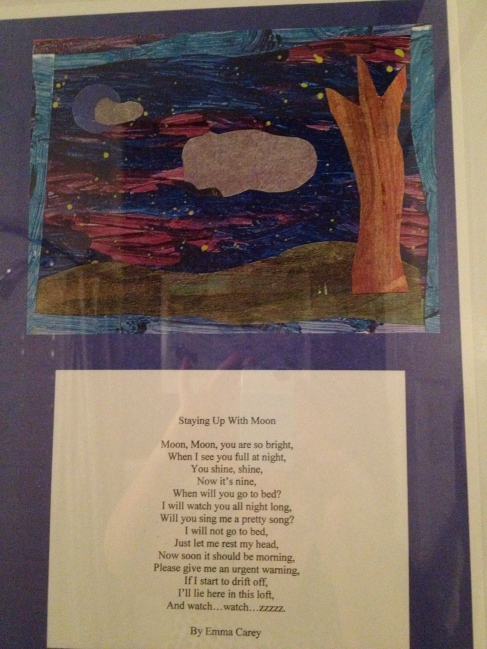 The “actual” poem over the john!

So what if we are all made stupider by tests?  And if that is not the case then what about the some of us that are?  I will admit it; I am one of the worlds worst test takers.  When I see a question and then the 4 possible answers I try to think about the “right” one and while one might seem “more” or “less” right, I get stuck on imagining the possibilities of what “could” or “could not” be right.  I see grey in a world of black and white.  I stammer in the ideas that the test is probably trying to trick me and so I get obsessed with thinking about outwitting, outplaying, and outlasting the test.  Yes, I want to be the sole Survivor, but I get too caught up in the game and then I simply freeze and ultimately I am blindsided and voted off the island.  I lose.

This past weekend in NYC at Barnard (see previous post as well as here:  Totalwebcasting.com/live/columbiatc/20130504/ for live on streaming) was eye opening on so many levels.  It made me wonder about so many things…many of which have to do with testing and beyond.  I heard stories, saw grown men weep, and felt passion so great it was palpable.  I met people that I have only “known” on-line for the first time in person.

I was welcomed into Renee Dinnerstein’s (See her blog here:  http://investigatingchoicetime.com/)   home in Brooklyn…our first face to face meeting ever and she hosted me for 2 nights.   We talked for all the time I was there.  She introduced me to her husband, Simon and his incredible works of art that line their Brooklyn Brownstone and beyond.   She took me to the public schools of NYC, gave me history of the area, of her life, the schools, the system.  We visited an exhibit at the Brooklyn art museum by Anatsui, amazing!!  Thank you Renee for your kind hospitality and for bringing together great minds for brunch where I also met Vicki Vinton, (See Vicki’s blog here: http://tomakeaprairie.wordpress.com/)  on-line colleague, for the first time.   But most of all I learned that I am not alone in this endeavor.  There are so many of us out there who are so discouraged, outraged and ready to take action.

Tomasen and Renee at Anatsui exhibit

And while I was hoping to have a great post synthesizing the weekend, I realize I still have a great deal of processing to do.

And so as my 16-year-old Zachary heads out the door for his annual NECAP testing this morning he seems to be fine with it.  Both of my kids are better test takers than I am.   In fact, he enjoys the testing perks…early senior privileges and the fact that teachers are not allowed to give homework during testing because they want students performance to be stellar.  (Is it just me or can you see how ironic this is?)  Our schools are ready and willing to help students get more sleep FOR the tests, but not for everyday schooling.  Sometimes I think I am crazy, or just looking for answers in my brain that are just not there.  Am I asking the right questions?  That is the real question, or am I just searching for something over the john?

A Journal of Brief Literature

Talking through what it means to lead a literate life and beyond.

This blog and podcast focus on issues related to distance, online, and blended learning at the K-12 level, specifically the use of virtual and cyber schools.

A meeting place for a world of reflective writers.

A daily selection of the best content published on WordPress, collected for you by humans who love to read.

A Blog about Learning, Teaching, Writing, and Reading

A Narcissist Writes Letters, To Himself