“Do you view learning as a moving process?”  Tom Newkirk asked me pointedly at one of our recent Learning Through Teaching meetings.    I stopped.  I thought.  I instantly felt on the spot as thoughts raced through my mind keeping my mouth from moving…(doesn’t everyone think like this?  Isn’t it normal to try to become a concept to truly own it?  Was I weird?  Different?) Visions of movements danced in my head as I pondered this question and the room became breathless and time dragged painfully and silently on, I finally answered, “Yes, I do.  Doesn’t everyone?” 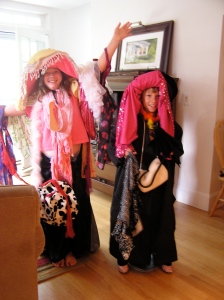 The question came in response to my reporting on the work I was doing in a 7th grade science classroom where students were reading about tectonic plates. The textbook was overly busy with gaudy colorful features in an attempt to give flavor to the flat and deadly boring text.  And getting through that text was my mission for the day.  How does one even begin to make their way through so much information, never mind actually digesting it?

And so we moved slowly, as slowly as those tectonic plates themselves and for the first part of the lesson I was able to keep those kids with me, until I couldn’t.   One minute they were there and the next, they checked out, noticing the intricate patterns on the cement block walls, what was happening out in the hall, up at the ceiling, out the window or anywhere else they might find interest.  I had lost them.  They had been sitting for over a half an hour and they were done.  Overloaded with too much information about how to read as well as the content covered.  What to do?

A quick charge of energy surges through me as I envision these kids up and out of their seats and actually showing their learning with their minds and their bodies.  I had not planned this, but this is how I teach.  I start in one place and based on the “read and the lead” of the group I make a teaching move, to provoke them into a different kind of thinking and learning.

So many times I observe teachers plowing through information just to get through it even though as many as half of their students are not with them.  I NEED everyone to be with me.  THAT is my underlying goal no matter where I am, whom I am teaching and what we are learning about.  Are they WITH me?  And as soon as they are not it is up to me to switch gears.  I never know where it will take me, but I do know when it needs to happen.

I stop mid page and tell them all that their next job is to create a moving tableau of their learning.  Tableaus are statues, but this content demanded movement for understanding…thus moving tableaus. I walk around to each group of 4 or 5 students, giving them one word that they as a group would have to “show” in front of the class.  As I am handing out words such as tectonic plates I see faces of confusion, excitement and horror all in the same room.  “What do you mean?”   I simply tell them that they can refer back to their reading and that as a group they had to become that word.   They had five minutes to plan this, rehearse and be ready to perform for the group.

The classroom bursts with energy moving from a morgue like state into one of organized chaos with sounds, shrieks, laughter and conversation.  The time limit is there, yet flexible in my mind as I walk around noticing what each group is planning.  THIS is where the true learning takes place as each student argues and vies for their place in the tableau.   I remind them that the only rule is that EVERYONE in the group must be involved.  Some groups work through their concepts together where as other groups real leaders emerge and attempt to tell the rest of the group what to do.  I move in and out of the groups observing and bathing in this newfound energy and the relief of hearing so many voices other than my own!!   THIS is why I teach!  I love that surge of excitement and energy. I am giddy with the thought that these kids might actually learn something that they can take with them that day.

And then the production begins as each group moves to the front of the room and silently shows their concepts.  The tectonic plate group had struggled with the idea of showing movement because the plates in real life actually move so slowly over thousands of years.  In the end they decide to show the movement in the smallest increments as possible as they move and shift one after the other, giving a disclaimer that this movement is fast-forwarded over thousands of years, like a time lapsed photo.  Yes!   The rest of the class shouts out what they think the group is showing and it ends in laughter, clapping, and a collective bow from the group and on to the next group.  It is quick.  It is painless.  It is fun.  They are with me and it is something they will remember.

Why?  Why will they remember?  They will remember because they had to manipulate the information in their minds and to think more deeply about the concepts we had just read.  They had to embody and actually become the tectonic plates.  So when that test that will inevitably come, perhaps somewhere in their cells they will conjure up the movement that they made, the conversations that they had and be able to better show their deeper understanding of some difficult concepts.

So do I see learning as movement?  Yes, because I see movement as a manipulation of information to make it your own; the twisting and turning of ideas around in your head, with your arms, your legs, your whole being and sealing it in to not only your memory, but also your muscle memory and cells.  This energy cements the concepts and allows for our kids to hold on to it for longer.

How much movement do you see in classrooms versus time spent sitting in chairs from one class or subject to the next?  Why do we value this time more than movement and even noise?  It is considered more “academic” if children are quiet and in their seats?  And are we headed into that mindset even more so with the onset of The Common Core and the high stakes tests that will be attached to those standards?

These are the things that keep me up at night, and so we take baby steps… one simple change we can make as professionals is to intentionally “read and lead” our students to true depth of understanding and meaningful learning experiences.  When teaching, ask yourself  “Are they with me?”  “Are they still with me?” “Are they with me now?”  Because ultimately, if they are not with us, then what are we really doing other than dispensing information falling on deaf ears?  We need to listen and learn and provoke our students as often as possible and in our current educational climate we need to make these decisions based on our kids and let all of the other noise fall away as we look into the eyes of each and every kid and remind ourselves who we are and what matters and why!

6 thoughts on “Reading and Leading: Tectonic Plates in 7th Grade”